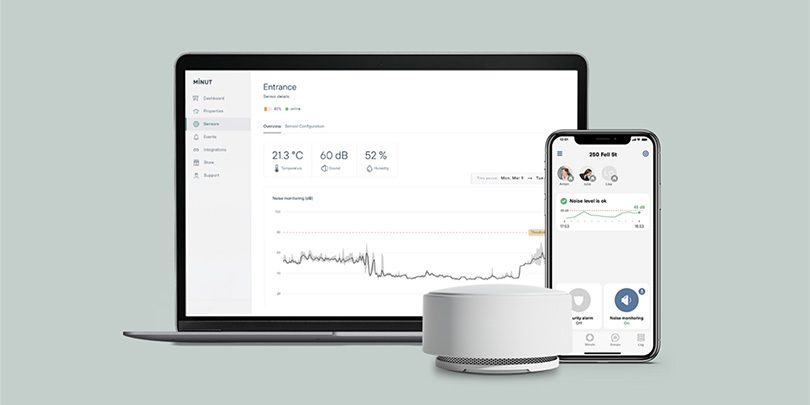 Written by Carrie Hillman
Do you have a Minut?
5 3

Minut’s smart device for your #vacationrental

These days there are so many #smarthome ways to integrate your home lighting, thermostats and security systems. Even though the advertisements say “Set up in five minutes,” it’s so hard to know where to start and which device to start with.

One device, all the things

Minut is a one stop shop for party/noise detection as well as a motion sensor, temperature monitor, humidity sensor, night light and more. Wow, right?

Here at WNAV, we were particularly interested to learn about Minut because it is a very simple and easy-to-install device. All of its features are in one unit. Translation: you don’t need to spend hours researching which add-ons, which extra sensors, which hub, and which other gadgets you‘ll need to make this thing work for you. You download one app, connect your smartphone to the device, and you’re off to the races.

And while we haven’t tried Minut yet, we’re very excited to give it a test run.

So let’s break it down here and figure out what Minut does:

Party/noise detection – This is Minut’s bread and butter. It is a smart home monitoring device that is 100% privacy safe. It is a completely camera-free noise monitoring solution. As a homeowner, you are not violating your guest’s right to privacy in any way. You can keep an eye on the decibel level of your home through an app on your phone. If it gets too loud, you call or text your guest to let them know.

Motion sensor – Minut lets you know if there is movement near the sensor. This is useful to know when vacationers arrive or depart. The Minut app updates every 15 minutes. You can change the settings to “more frequent sensor update” if you want.

Temperature monitor – Minut keeps tabs on the temp to let you know how your AC or heat is performing.

Humidity sensor – Minut can let you know the humidity level. You can even add an extra Minut in your basement to ensure your dehumidifier is working when you’re not around.

Nightlight – You can turn on Minut’s ability to act as a motion activated nightlight.

Tampering sensor – Minut will send you an alert if the device is removed.

Crowd detect – Minut can detect how many devices, like cell phones for example, are at your property.

Minut works on a rechargeable battery. It doesn’t take up valuable outlet space that guests need for their own devices, but more importantly, it is less likely to be tampered with or removed by a guest.

Minut doesn’t require a subscription when you use it in one rental property. If you have or operate more than one rental, however, they have a nominal monthly plan.

Updates in the works

Folks at Minut will send updates directly to the device every time they add a new feature to the product. Any and all cool new features are pushed right to the existing device, so you don’t have to do a thing.

How does Minut compare?

There aren’t many playing in the market of noise monitoring these days, and Minut is the one to beat. “We are the only company that takes a holistic view of the rental,” says Tyler Fabschutz, Enterprise Sales Consultant with Minut. Minut is the only noise monitoring device that also keeps tabs on many other aspects of the home, providing peace of mind for the homeowner. You can see in the chart below how Minut compares.

Dual use: high season and off season

A device like Minut can be useful during the high season to prevent parties from getting out of hand, disturbing neighbors, or leading to possible home damage. The device measures decibel levels and does not record words, so it is 100% privacy safe. But the company definitely recommends that you include something in your rental agreement to let renters know about the device. This will deter vacationers looking to party from booking your property.

It could also be useful in the off season. Minut has a built-in motion detector, and it will notify a homeowner if someone is in the home who shouldn’t be or if an alarm, such as a smoke alarm, goes off. It is helpful to monitor temperature in an uninhabited home to prevent freeze damage, too.

PC Mag did a thorough test run, and this is what they had to say, “The Minut alarm performed admirably in testing. The temperature and humidity readings matched the readings from a Nest Thermostat, and the motion sensor did a good job of detecting human motion while ignoring my cats. I set a sound threshold of 80dB, cranked up my stereo, and received an alert within one minute.” -PC Mag”

We are excited to give Minut a whirl once it arrives in the mail. We are also interested to see how helpful it is during this next rental cycle. We’ll be back with an update soon. In the meantime, check out Minut.com to see what you think.

Carrie was born and raised in the Northeast. She currently lives on the Cape with her two children and husband. They are a family of four who love to travel, play in the sun, hike and canoe. They enjoy sharing the beauty of the Cape while hosting guests at their home when they are traveling.